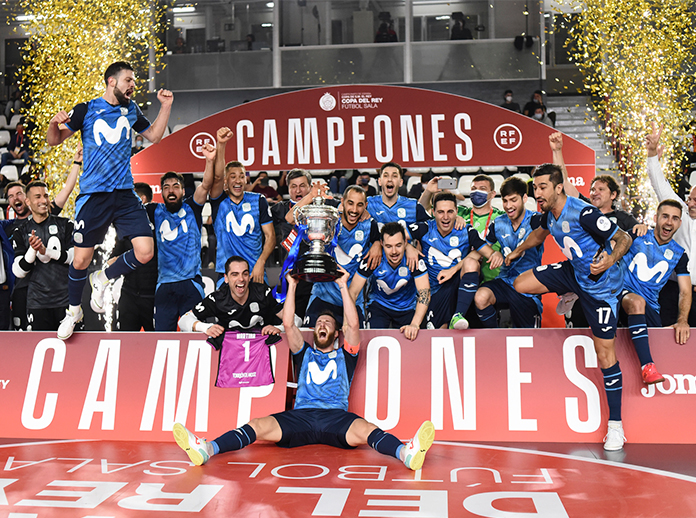 For the great final, the Toledo born coach chose Jesús Herrero, Raya, Borja and Pito again, but changed Fernando for Lucas Tripodi. Diego Guistozzi started with Alberto, Rafa Santos, Juanjo, Fernando and Parandynski. The early goal by Rafa Santos was a warning for the Interistas, after a steal by Alberto who gave it to the Murcian player to surprise Torrejón born goalkeeper in the first minute (0-1). A situation that did not throw off the Torrejón team and gave them more reasons to fight the following 38 minutes. In the 7th minute, Raya answered back with a masterful of a play. The native of Granda, with Fernando following fast in his sprint, cut back the difference against the Murcian goalkeeper, getting the tie (1-1) for his team. The visiting coach called a time-out to redirect his team’s strategy. Thus, managing to increase the pressure on Movistar Inter FS, who came out without problems and continued to insist on the attack. Fernando was awarded the tie-breaking goal with a well-directed left-footed shot that Juanjo could not avoid (2-1). Tino Perez’s team had turned the game around and ElPozo Murcia lost strength in the fifth minute of the game. The Madrid players took advantage of the occasion by playing with Fernando and Pito on offense, and generating more chances than their rivals. Cecilio was not satisfied with the result reflected on the scoreboard, and before going to the locker room, the Cordovan scored the third for his team, making it 3-1 and increasing the distance on the scoreboard.

In the second half, the Interistas came out determined to maintain and even increase the score. Just two minutes into the second half was enough for Fernando to put a goal on the scoreboard with a perfect definition. The partnership of the Brazilians, Pito together with Fernando, was already visible in the last minutes of the first half and was rewarded at the beginning of the second half. The Interistas suffocated their rivals by recovering balls and attacking Juanjo’s goal without giving their opponents a chance. In the 23rd minute, Eric Martel had two good chances, but the visiting goalkeeper stood in his way and did not let the player from Barcelona materialize what he had in play. Diego Giustozzi took the risk of playing with five players with Dario wearing the goalkeeper-player jersey in the 28th minute. From then on, the Murcian siege on Jesús Herrero’s goal began. The reward for the visitors came in the 35th minute with a goal by Pol Pacheco when Movistar Inter FS was down to ten men (4-2). A minute later, Paranynsky gave his team reason to dream, cutting the gap in the scoreboard, and with only one goal behind, ElPozo Murcia kept trying (4-3). Pola struggled with his attack as Santa Coloma was breathing on his neck, and in the 39th minute, the Galician sentenced the game by making it 5-3 from the defending side of the court.