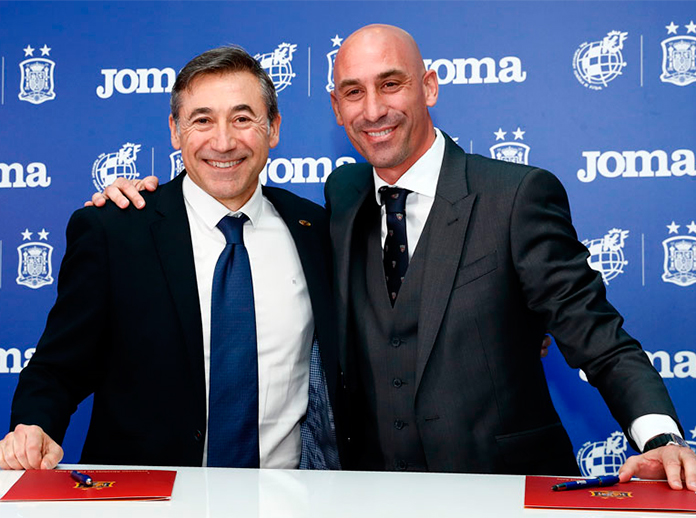 As of today, Joma will provide all the uniforms for the national teams and futsal competitions of the Federation.

The RFEF and the Joma sports brand have reached an agreement that makes this firm the new official technical sponsor of futsal. The Federation’s president, Luis Rubiales, and the general director of Joma, Alberto López, have today signed the contract that allows this partnership to begin.

In this way, Joma will now “dress” the men’s and women’s national futsal teams for all its classifications, and will be the official sponsor of all the RFEF competitions in this sport,from the Copa del Rey (King’s Cup) to the Copa de la Reina (Queen’s Cup), passing through the women’s Super Cup.

Over the course of the event today, the official ball that will be used by the national teams, one with a modern design based on the Spanish National Team colours, was presented, while the kit to be used by the national teams will be presented this coming April. The actual ball to be used in the Copa de España (Spanish Cup) will be unveiled on 25 February, at the introduction of the competition to be held in Málaga between 5 and 8 March.

On behalf of RFEF, its president, Luis Rubiales, wanted to highlight the importance of this agreement which, without a doubt, will allow the promotion of futsal to continue progressing, a priority for the institution he heads and which is responsible for Spanish football as a whole.

Likewise, he outlined the development of Joma as a company, one which celebrating its 50th anniversary as a leader in sports goods. He and has extended congratulations to all the members of this sports market leader, starting with is president, for its achievements over all these years.

For Joma, the image of an athlete has always been its best representative, which is why in the upcoming Tokyo Olympic Games it will dress8 Committees, including the Spanish Olympic Committee. At the most important world sporting event, the brand will also be represented by 18 Federations of different disciplines: The Spanish Royal Athletic Federation, the Spanish Royal Handball Federation and the Spanish Rugby Federation, among many others at the international level. To these must be added those in football, where Joma has the highest number of sponsorships in the Spanish leagues together with Nike, in Italy with Sampdoria FC, Torino FC and Atalanta FC, surpassing the principal brand competing in that country. In Belgium, with the RSC Anderlecht and the Hoffenheim in the Bundesliga, together with the national teams of Rumania, the Ukraine and Honduras total more than 300 professional teams throughout the football world. In addition, Joma, in futsal has the champions of the Italian, Brazilian and Spanish leagues.

All this makes the brand the leader in the Spanish market and third at the world level, thanks to the efforts and support of thousands of sports professionals and amateurs who rely on the brand more and more each day.

With this agreement, the Federation continues developing it strategy of product diversification, showcasing the assets offered by the different football modalities and increasing the opportunities for commercial collaboration tied to National Teams and Tournaments.